Building My First HPA DMR (Surprise, It's a Kc02) 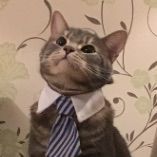